At times, we artists feel the urge to make something cool. If there’s no paint around, or if perhaps I feel inspired by some other material, I may find myself creating a new thing from re-purposed stuff. In fact, it’s sort of a tradition around the Freeman house.

My grandparents lived through the Great Depression, and my parents raised me (and my brother) to be resourceful, not wasteful. I think we’ve slipped pretty far from this kind of ethic as a culture. However, I still find plenty of folks who value what I’d call “good stewardship.” So, in that spirit, here’s a sampling of re-purposed stuff from my family.

This clock is a “found-object” sculpture made by my husband, Scott. It was made almost entirely of old pieces of junk that we found in our basement in Kansas City. The chunks of wood contain a poem, written by my son, Lee, when he was just 3 years old. (He was a precocious son-of-a-gun!)

Seconds are hardly anything at all

Here is a purse I fashioned from fabric scraps, some of which were cut from previously worn clothing. I made quite a few of these one year. I sold them in boutiques and by commission; but it took too long to make them to make it worth my time. I would have had to charge about $150 each if I was to make a profit, which did not seem realistic in an economic downturn.

The picture frame was one of a series I received as gifts from my children. This one was made by my son, Caleb. The photo is a bit blurry, because I am not a

photographer, I am a painter. Still, maybe you can make out the many nature references, such as the bird’s nest in the corner. Caleb is now about to graduate college with a degree in Natural Resources, Recreation, and Tourism.

On one occasion, this was a gift from my son, Joel. It normally hangs on my dresser mirror, making me smile when I see it. 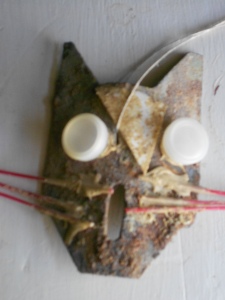 Cat mask, a gift from Joel

A couple of years ago, I made a few of these skirts out of old t-shirts. This one belongs to my daughter, Sierra. Hers came out so cute that I may have to make one for myself this summer.

Now we come to the mermaid. She hangs in our bathroom. She is made

primarily of hammered pennies. This was a very tedious project for Scott, and he says he will never do it again, so don’t get any ideas.

There are many more such re-purposed items in and around our home. If you want to see more, let me know. I can do another post in the future on this topic. Soon, I hope to interview a dear friend who makes art from re-purposed stuff. Her pieces are fantastic! I can’t wait…

I am a fine art painter, & I am studying to be a health coach at the Institute of Integrative Nutrition.
View all posts by Mollie Walker Freeman